History of the Episcopal Diocese of Maine 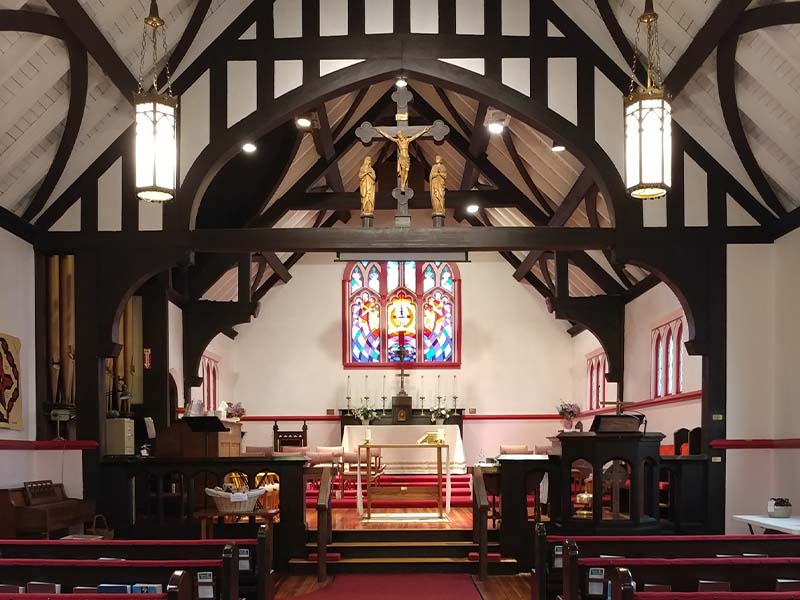 The Diocese of Maine had its first beginnings at Popham, when the colony of Maine was established in 1607, only four years after the death of Elizabeth I. We can trace our tradition of Anglican theological and liturgical expression – solidly mainstream, though with parishes among us who would describe themselves variously as Anglo-catholic, evangelical, or renewal-focused – back to the embracing tolerance of the Elizabethan Settlement.

Maine was part of the Eastern Diocese (which included all of New England except Connecticut) until Maine became a state separate from Massachusetts in 1820 and the diocese held its first convention – with delegates from the two churches in Maine, Christ Church, Gardiner and St. Paul’s, Portland – two months later.

The diocese completed its move to independence in 1847 with the consecration of the first Bishop of Maine, George Burgess. Bishop Burgess’ own combination of liberal evangelicalism with sympathy for the Oxford movement (albeit he warned against what he called its “medieval and nonscriptural tendencies!”) confirmed Maine’s comfort with a wide variety of worship styles.

It was during the episcopacy of Maine’s second bishop, Henry Adams Neely that St. Luke’s Cathedral Church was built in Portland. He also presided over the founding of Episcopal schools as well as the predecessor to the Episcopal Church Women, and a lively growth of missions in the central, eastern, and northern sectors of the state. During his watch, the diocesan paper, The Northeast, the oldest in the country, was established.

The diocese increased by almost a dozen more missions, and Bishop Robert Codman added the beautiful Emmanuel Chapel to St. Luke’s. The Cowley Fathers, members of the Society of St. John the Evangelist in Cambridge, Massachusetts, staffed many of the parishes and missions north of Bangor at the turn of the century, leaving their mark on the theology and liturgy of the northern half of the state.

As parishes and missions and a wide variety of summer chapels proliferated over the century and a half of Maine’s history, the challenges to Maine’s unity and identity as a diocese centered on its enormous geographical area and far-flung rural congregations, often sited in economically struggling areas. A central task of the diocese during this time during the episcopacy of Bishop Benjamin Brewster was to combat the “danger of losing a sense of corporate unity.”

The diocese under Bishop Oliver Loring continued to wrestle with the needs of the missions and small congregations north of Bangor. Bishop Loring strove to spread church school by mail and used talks and slide shows to raise money to support missions.

The era of Bishop Fredrick Wolf saw enormous change in the life of the Episcopal Church as a whole, and the diocese strove to absorb those changes at home. As it worked to develop eight new congregations and to bring eight others to full-time status, the diocese was simultaneously making the transition to the new Book of Common Prayer and the ordination of women. Bishop Wolf implemented a vision of a strong vocational diaconate, maintaining an active ministry in the world. Bishop Wolf introduced the Regional Council system as a way of combating “we-they” perceptions in the diocese. He also combated clergy isolation by developing a strong support network for clergy through monthly “clergy days,” a “mutual ministry” which was blessed and strengthened by the bishop’s own recovery work from alcoholism halfway through his episcopate.

Bishop Edward Chalfant presided over the founding of a Long Range Planning Committee which developed, in conversation with local congregations, the diocese’s first mission and vision statements. Under Bishop Chalfant’s guidance, the diocesan commissions underwent major restructuring. Work included goals of streamlining the budget building process, strengthening the regional councils and the Diocesan Council, stimulating and supporting a variety of outreach ministries, and generally broadening the representation from local congregations in the governance of the diocese. The strengthening of rural congregations and the maintenance of diocesan unity were issues at the forefront of diocesan concern. In May 1996, Bishop Chalfant resigned as the result of the revelation of sexual misconduct.

The eighth Bishop of Maine, Chilton Knudsen, was elected at Diocesan Convention on November 1997 and consecrated at the Cathedral of St. Luke, Portland, on March 28, 1998. She was the 11th woman to be elected bishop in the Anglican Communion. From the start, Bishop Knudsen expressed her commitment to a shared episcopate and has empowered many diocesan groups and all baptized persons to take responsibility for the work of the diocese among the 65 congregations across the state. In 2006 Bishop Knudsen was inducted into the Maine Women’s Hall of Fame.

The ninth Bishop of Maine, Stephen Lane, was elected at Diocesan Convention on October 2007 and consecrated at the Cathedral of St. Luke, Portland in May 2008.

The tenth Bishop of Maine, Thomas Brown, was elected at a Special Convention in February 2019 and consecrated at the Cathedral of St. Luke, Portland in June 2019.

Take a look at our interactive timeline to learn more about Episcopal Maine.

Dedication of Bicentennial Chalice and Paten Sets on November 20, 2022

Hymn: On Christ the Solid Rock with Lyrics for Maine

Bicentennial of the Diocese of Maine

Archives of the Diocese of Maine