The General Convention is the primary governing and legislative body of the Episcopal Church in the United States of America. With the exception of the Bible, the Book of Common Prayer, and the Constitution and Canons, it is the ultimate authority in the Episcopal Church. General Convention comprises two houses: the House of Deputies and the House of Bishops. It meets regularly once every three years.

Next up: 81st GC in Louisville! (If you’re interested in becoming a deputy, find the nomination form on our convention page.)

Watch this final message from Mark Spahr recorded as they travel home from #GC80.

Hear from Bishop Brown on the final day of #GC80.

Watch the Very Rev. Dr. Ben Shambaugh, Dean of the Cathedral and General Convention Deputy recap  the deputation’s first day in Baltimore. Continue to pray for them and the work of the convention.

Find a transcript of this video, photos from the deputation, and more on our blog: 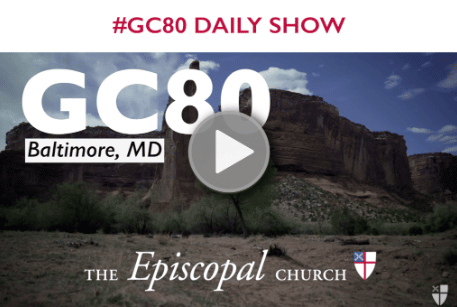 General Convention began on July 8th and ran through Monday the 11th and everyone was able to follow along with the action in Baltimore.

The sessions of the House of Deputies and House of Bishops, as well as daily media briefings from the Office of Public Affairs and #GC80 Daily Show videos were available via livestream and on demand on the Media Hub.

We also shared updates from our Maine deputation and Bishop Brown here on the blog and on our social media channels.

Meet our elected representation for #GC80.

Find a list of resolutions, voting results, and finalized text here for both houses.

Reports to the 80th General Convention

Journal of the 79th General Convention