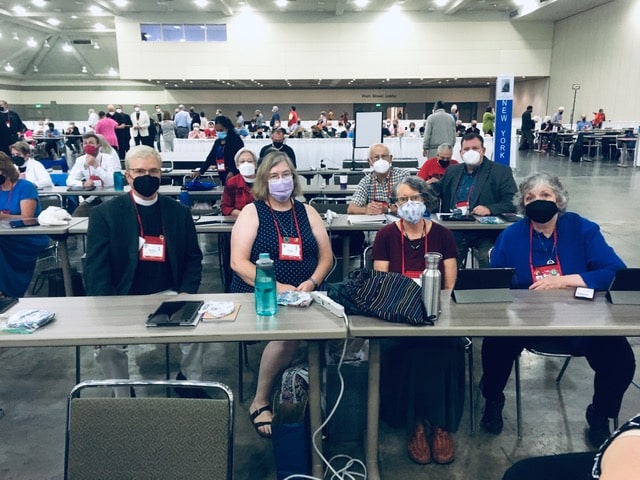 Greetings from Baltimore! We finished our business by lunchtime today. The last few items of business are usually courtesy resolutions. These are resolutions that essentially say thank you to various people for contributions made to convention. The Maine Deputation had a lovely dinner together, celebrating our work and new friendships. Tomorrow we all head back to Maine, tired but content.

A long day today at General Convention. We set in motion special recognition for the Right Reverend Barbara Harris who was the first woman to become an Anglican bishop. We also passed a long, convoluted resolution which was designed to clarify the budget process, and the budget itself. The Maine deputation is presenting well. Mark and Ben have both gotten up to address the house. Yesterday we elected a new President of the House of Deputies, and today a vice-president. Both of them will step into their rolls tomorrow at the last gavel. Julia Ayala Harris, the President, is the first Latina to hold the position. Rachel Tabor Hamilton is the first ordained woman to hold the position of Vice President. Tomorrow is our last day to wrap things up!

Greetings! Liz here, at General Convention in Baltimore, Maryland. One of our most difficult discussions today was around where to hold the 2024 and 2027 conventions. Sounds easy, right? The 2024 convention is scheduled to be held in Louisville, Kentucky, where the state leadership . . . well . . . does not support a woman’s right to control her own reproductive health. So the question becomes more about the safety of the deputies, especially if they are pregnant, or do we only have conventions in areas where we agree with political norms. This was one of those questions in which I could very easily see both sides of the argument. I really thought I was going to vote against Louisville, but in the end, I voted for it. Does that mean I agree with the politics? No way, no how. I was moved by the deputies who come from Kentucky and surrounding states who also don’t agree with the politics. I decided our presence there might mean an awful lot to the people of that community. It’s really hard to say what the political climate will look like in two years. I guess we’ll find out.

Hello! Liz here, writing from General Convention in Baltimore, Maryland. The first day of convention can be a little slow: we fill positions, and vote on how we will conduct our business. If you have ever been to diocesan convention, it is much the same. Today was a slower start than usual, as when we all tried to get online at the same time (800 of us) we kinda blew the Wi-Fi. After lunch we were able to get some work done. The resolutions that had the most debate were the ones about racial and cultural reconciliation. Everything that came at us, we approved. We had three sessions, finishing this evening at around 9:20.