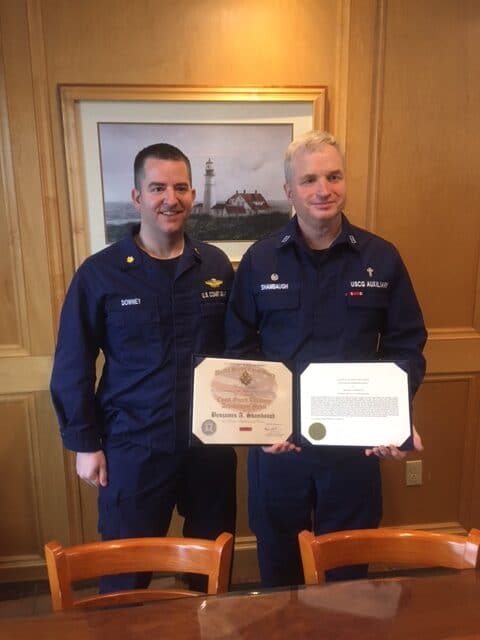 “Semper Paratus – Always Ready”. That’s the proud motto of the United States Coast Guard, the guardians of our Nation’s maritime safety and security. The Coast Guard trains tirelessly to fulfill this vital mission, and are ready for almost anything that comes their way. But how do you prepare for the rescue that does not have a happy ending? How do you tell the family of a missing boater that their loved one is not coming home, and still be ready to go back out again tomorrow? How do you cope as a young Coastie, far from home, serving long hours in remote locations, without your support system of family and loved ones? That’s where the Coast Guard Auxiliary Chaplain Support (ACS) program comes in. The ACS stands always ready to support and care for the men and women who stand watch on our Nation’s shores.

The ACS Program supplements and supports regular duty Navy Chaplains serving the Coast Guard by expanding Religious Ministry within the Coast Guard to better meet the needs of Coast Guard members and their families. Like all members of the Coast Guard Auxiliary, chaplains in the ACS are uniformed volunteers who take the skills and experience from their civilian lives and use them to serve those in the military.

This has been particularly evident during the time of Covid. ACS chaplains are ordained and trained religious professionals who — after having received ecclesiastical endorsement, Auxiliary and Coast Guard training, and appropriate background checks – support the work of active duty chaplains. Chaplains offer prayers at ceremonies and events and are part of the leadership team, focusing on counseling, responding to and training people to deal with trauma and suicide prevention as well as the stressors of daily life, and providing life-skills and support. They function as the go-to person for many areas, including advocating for Coasties with command. The need for auxiliary support becomes clear when you consider that the Coast Guard does not have its own chaplains but uses Navy chaplains who tend to cover huge numbers of people over large geographical areas. Until recently, Sector Northern New England, which covers New Hampshire, Maine and Vermont – an area with a large amount of coast line and an equally large number of small stations – had only one chaplain. Thanks to the ACS of the Coast Guard Auxiliary Casco Bay Flotilla 2-1, it now has four.

The ACS team of Flotilla 2-1 began with George Van Syckel. In his civilian life, George is a pastor who lives in Buxton Maine and also serves as a chaplain to the South Portland Police Department. Very quickly, Chaplain Van Syckel became Branch Assistant, a national position in which he oversaw and provided support to the 11 ACS chaplains of Coast Guard District One and began recruiting others to join him in this work. The value of having a local pastor on the chaplain team was made clear a few months ago when a member of the Coast Guard was in Maine Medical Center. Because George had a badge from his civilian work as a police chaplain, he was able to make the call. With a flexible schedule, George has also been available to preside at several funerals and other events.

John Wentworth was the second member of Flotilla to join the ACS program. John is a pastor of the Congregational Church of Pownal Maine and also works as a high school basketball referee. John has been able to focus his efforts on reaching out to flotilla members and their families, serving as the Flotilla Lay-Leader. He is making plans to visit and establish relationships with the Coast Guard Stations in Boothbay, Rockport and Eastport, as well as South Portland and is scheduled to do a Coast Guard wedding this summer.

Ben Shambaugh was the third member of Flotilla to join the ACS program. In his civilian life, Ben is an Episcopal priest and Dean of St. Luke’s cathedral in Portland, Maine. He succeeded George as Branch Assistant. Ben has visited Coast Guard Stations in Burlington, Portsmouth, and Rockport as well as South Portland. He was part of the Search and Rescue meetings with the family of the crew of a fishing vessel, providing support to both team Coast Guard and the family members. He helped host Captain Wolcott (the chaplain of the Coast Guard) and Captain Stuart (the chaplain of Atlantic-East) on visits to District One (D1) and organizes monthly meetings of all the D1 ACS, working closely with the D1 chaplain and National Staff. In the fall he attended the annual training for Coast Guard Chaplains, an event that will be repeated in March.

Chaplains Van Syckel, Wentworth and Shambaugh provide real-time support for the Sector Northern New England Chaplain, bringing a combination of more than 100 years of professional ministry experience, with a wide variety of skills and expertise.

How large is this effort? Consider the numbers for Atlantic-East. Despite Covid, during the year 2020 the 44 volunteer ACS chaplains of the Atlantic-East drove more than 40,000 miles, spending more than $27,000 of their own money in order to complete their work. This included 3491 hours in mission, 2269 hours in administration, 679 hours on phone calls, and a whopping 814 days of standby duty. All of this is unpaid volunteer time, filled by Jewish rabbis, evangelical and mainline Protestant clergy, and Catholic priests and (soon) deacons, most of who have regular full-time jobs. (These numbers do not include additional time ACS chaplains spend in other missions with their local Coast Guard Auxiliary Flotillas.)

For members of the ACS like Ben Shambaugh , the wonderful thing about this role is the amazing way they are welcomed when they visit the Coast Guard Stations, and how much this work of the Auxiliary is appreciated by the active-duty Coast Guard. Regardless of the fact that they are unpaid volunteers, the Coast Guard Auxiliary and the ACS is an essential part of team-Coast Guard and is always ready to serve those who serve. Semper Paratus!